Random thoughts of an upbeat mind

I have fallen off the exercise bandwagon … again.

Ever since I learned the battery in my scale had died, I’ve let getting back to healthy lag a little.  I am still counting my calories but I am not working out.  The last time I exercised was 2 weeks ago. 😦

And let’s not talk about the late night snacking that still continues.  I don’t think I’m hungry.  I think that it’s boredom.  I picked up my blanket in the hopes that crocheting would keep my hands busy making it less likely for me to eat.

Today I did my minimum 10 minutes.

Tomorrow morning I have to get up early to drop Diva at school so I am going to exercise when I return and get that monkey off my back.  My plan is to make the commitment.  Easily said now that I’m starting to feel flabby again.

The next unfinished craft

I took it out of the unfinished craft box and I’ve photographed it.

I am trying to spend some time with it while watching TV.  That has not been as productive as I would have liked.

Hopefully by the end of the month, it will be bigger than this.

I am fairly sure it is safe to say I took my eye off the ball last month.

Yup, proof I took my eye off the prize.  On the financial front I was 1.44% over my monthly budget and I blame that on the creme brulee. 😉  Had I not gone out to dinner with my friend I would have been under budget.  Lucky me I get another month to try again! 🙂 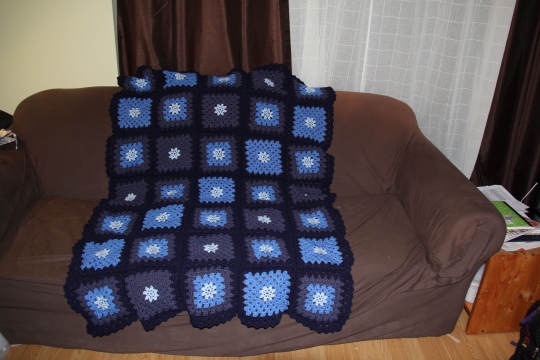 It’s done.  I am FINALLY finished my first granny square blanket.  And just in time as my BBF’s moving day is tomorrow!!

I’m glad I listened to my cousins and put a border/edging on it using this pattern.  It really does pull it all together and make it look much nicer.

Now to find a bag to put it in.  After 6+ years it is finally moving out!!

I do not have to see a mall or store other than for groceries until next year!

I am finished my Christmas shopping.  So far, I have spent $357.50.  I still have to give money to my kids and sister.  I usually give my sister $50 and am thinking to give my daughters $60 each.  Originally I was leaning towards $100 each but I have since purchased them presents so reducing the amount made sense.

I have hit upon a little dilemma.  For the first few years that we lived in our apartment we had a Christmas tree made out of green bristol board that was taped to the wall.  A couple of years ago I bought a small real tree in a pot, which I have since killed. 😦

Think anyone will notice?  LOL

And yes, I still have my dead tree, not sure why but it’s still here.  One of my crafty friends suggested I spray paint it green.

The thought of getting a big real tree and dragging it to my apartment is not that appealing to me.  I saw a few small trees when I was out yesterday and for a brief second I contemplated bringing one home.

Aren’t they cute?  The only reason I didn’t was I wanted to check my Christmas budget first. 😉  I know, it surprised me too.

On a different note, I have been plugging away at the blanket.  This is what it looked like before I finished putting all the granny squares together.  I am debating putting a border around it.

Now I just have to tidy up the loose ends.  I wish I had thought about it when I was in Wal-Mart yesterday as the needle I have I do not like.

There have been a few things on the go for me lately so I figured I’d give you a quick recap.

On Friday I finally finished the scarf I started … way too long ago.  Unfortunately the only picture I managed to take of it was a quick shot to send to my cousin so she could see what she inspired.

The scarf is quite long and was quickly claimed by one of my friends who is a big Steelers fan.

When I say my cousin inspired the scarf, it’s not the scarf itself but its completion.  In the past month, my cousin has knitted herself a hat, cowl and a hooded scarf.  She is now working on her second hooded scarf.  All in the time it took me to crochet 10+ rows.  She is speedy quick and very dedicated.

Anyhoo, now that the scarf is finished, I miss crocheting so I picked up one of my many incomplete projects.

These piles will eventually become a blanket.

I am going to confess that these granny squares have been in this state of limbo for more than 6 years.  I vaguely recall moving with them.  Putting together the blanket just seemed like a daunting task.  I started this blanket to give me something to do.  It is for my BFF.  I am going to attempt to finish it before she moves into her new apartment in January.  If I recall correctly this was supposed to be a house-warming gift for her, at least 4 moves ago. *hanging head in shame*

In other news, Diva is now the proud owner of a broken screen on her iPod Touch.

Apparently one of her younger cousins got ahold of it over the weekend and decided to pitch it on the floor.  It still works but she is heartbroken.  We went to the Apple store on Sunday and was told it is $99 to replace it but we need to make an appointment online in order to do so.  Say what!?!

I’m here in your store willing to give you my money and you want me to go home and make an appointment???  Apple is making too much money.

This is Monday’s leftover veggie soup. 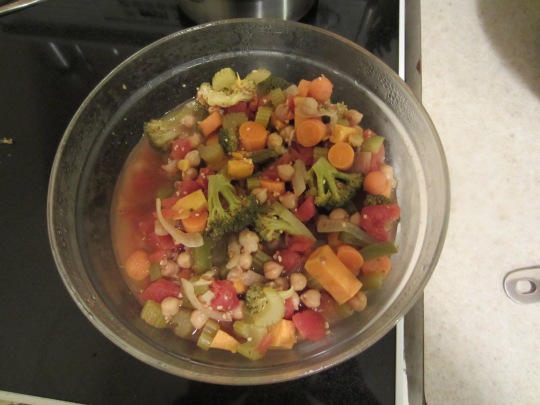 With a little salt and sriracha, it is delicious.

This morning I had to drive Diva to a volleyball tournament at a school that is about a 10 minute drive away.  I was up early since the news said we could get a ton of snow.  I was afraid we would be dumped on like Carla was in London.   But we were lucky and only got a light dusting.

Most of the roads I drove on were clear which is a great thing.

I think that’s about it.  You are all caught up now! 😉

I started my scarf. YEAH!

I’m on the 9th row and I just realized I am doing it wrong. 😦 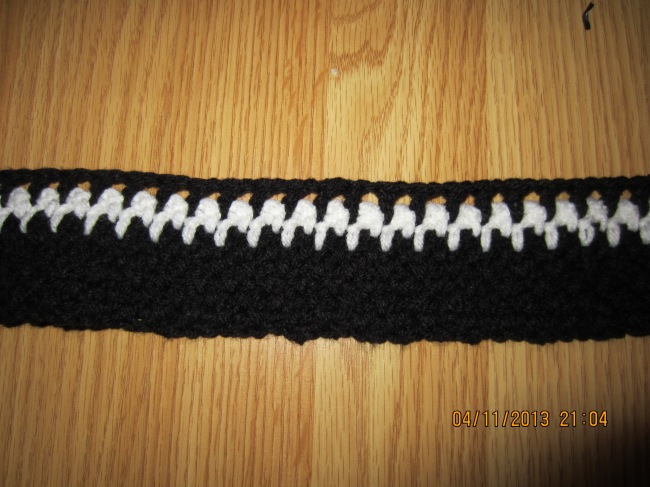 Can you guess where I did not put my double crochet stitches?

Man it’s been too long since I have been here.  Sorry.

I am suffering from there really isn’t enough time to do everything you want to.

Work has been crazy busy and when the day is over I am finding it hard to sit in front of my computer for any long periods of time. I am so very behind on my blog reading.

I’ve been trying to get back into reading.  I recently finished The Glass Castle and Let’s Pretend This Never Happened.  Both were fantastic.  Right now I am reading The End of Your Life Book Club.  It too is good, but … it  lists other great books to read.  Where do people find the time?

I am still focused on my health, trying to go to bed at a reasonable hour, eat well and all that other good stuff.  Bed bedtime is not going as well as it could.  At 10 pm I feel like I should stay up later I’m a grown up.  And I do, usually end up going to bed closer to midnight, then the next morning I am crying to get out of bed. 😦

I am trying to limit the amount of TV I watch but that seems to be easier said than done.  It really is a time suck.  Once it’s on, it stays on.  Sometimes just as background noise.

I bought myself some wool last week.  I saw this on Pinterest and fell in love.

Sad part is after buying the wool I realized I could have just bought the already made scarves.  And it would be cheaper than buying just the wool.  But there’s something to be said for doing it yourself, right?  I am going to attempt the black one first.